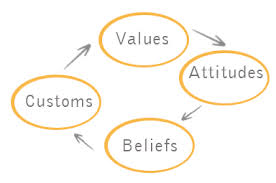 This blog is about American Culture and the pressing need for an American Evolution in our culture. We will publish articles addressing American Culture, and exploring why the ways we think, act and interact are becoming too destructive and must evolve. If you think there is no problem, you may learn something by reading some articles on this blog.

The greatest product of some foreign countries is their culture and how their ways of thinking, acting, and interacting foster cooperation, caring, and civil refinement, shunning aggression as the last resort of those who do not have the capacity to intelligently and humanely interact in the face of everyday problems.

We will look at why American Culture has contributed to a society which has become too harmful and dangerous.

America can and should adopt some of these cultural refinements, so we as a nation can be safer, stronger, and better equipped to handle the challenges of technology and the future.

We hope to foster constructive criticism from both Americans and people from other nations. We welcome your comments, articles and links to relevant information.

Constructive criticism is an act of respect and the work of patriots.

You can reach us at robroman2112@gmail.com

More information about what culture is below:

Culture (Latin: cultura, lit. “cultivation”[1]) is a modern concept based on a term first used in classical antiquity by the Roman orator Cicero: “cultura animi” (cultivation of the soul). This term re-appeared in modern Europe in the 17th century referring to the betterment or refinement of individuals, especially through education.

During the 18th and 19th century it came to refer more frequently to the common reference points of whole peoples, and national aspirations or ideals.

Hoebel describes culture as an integrated system of learned behavior patterns which are characteristic of the members of a society.

Distinctions are currently made between the physical artifacts created by a society, its so-called material culture, and everything else such as lanuage, customs, ways of thinking and shared beliefs.

Samuel Pufendorf took over this metaphor  and changed from an aspiration of the soul, to “all the ways in which human beings overcome their original barbarism, and through artifice, become fully human“.

A given nation-state or society may have a single, dominant culture to which immigrants assimilate (the melting pot model), or be multicultural (the salad bowl/cultural mosaic model).

Cultural invention has come to mean any innovation that is new and found to be useful to a group of people and expressed in their behavior but which does not exist as a physical object.

Humanity is in a global “accelerating culture change period,” driven by the expansion of international commerce, the mass media, and above all, the human population explosion, among other factors.

Cultures are internally affected by both forces encouraging change and forces resisting change and are involved in the perpetuation of cultural ideas and practices within current structures.

One thought on “About”